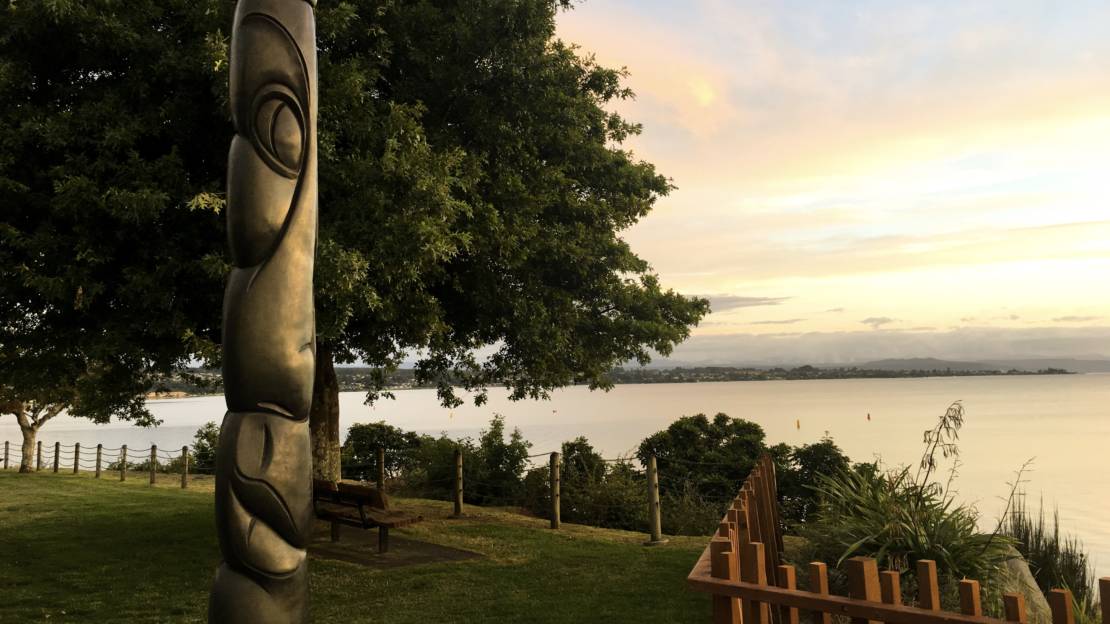 Taupo Sculpture Trust is delighted to have this major  sculpture on loan from one of New Zealand’s foremost sculptors, Terry Stringer.

The timelessly elegant ‘Flora Totem’ stands at just under four metres tall and is cast in bronze. In true character of Stringer’s style it plays on perception and appears to change form as you move around the work, a flower becoming a face then morphing into a hand. The beauty of Stringer’s work is that the more you look at it, the more you see.

We are delighted to present this stunning sculpture on the lake-front (beside the water treatment plant) for the public to interact with and enjoy. It’s an absolute privilege to bring such a prominent sculptor’s work to Taupo.

This project would not have been possible without the generous support the Trust has received from the Creative Communities Scheme, Taupo District Council, and of course Terry Stringer, who is generously sharing Flora Totem with us.

Born in Redruth, Cornwall, England in 1946, Stringer became a naturalised New Zealander in 1979. He received a Diploma of Fine Arts from the Elam School of Fine Arts in 1967. Many New Zealand galleries and collections feature works by Stringer and he has completed a number of public commissions. Stringer has been the recipient of numerous New Zealand art awards and scholarships and has been awarded the Queen Elizabeth II Arts Council Scholarship three times.

Throughout his career, Stringer has been commissioned to produce sculptures for high-profile public sites. These include ‘The Risen Christ’ in Cathedral Square, Christchurch, ‘Mountain Fountain’ outside The Holy Trinity Cathedral, Auckland, and ‘The World Grasped’ in Newmarket, Auckland.

In the 2003 New Year Honours Stringer was appointed an Officer of the New Zealand Order of Merit for services to sculpture.